SURVIVORS - SOMETIMES IT IS HARD TO BE STRONG

Posted by No More Crying Angels at 8:53 AM No comments:

No one said it is easy to fight back or take the steps to protect yourself. But REMEMBER

Posted by No More Crying Angels at 6:34 PM No comments:

The Childhelp National Child Abuse Hotline is dedicated to the prevention of child abuse. Serving the U.S. and Canada, the hotline is staffed 24 hours a day, 7 days a week with professional crisis counselors who—through interpreters—provide assistance in over 170 languages. The hotline offers crisis intervention, information, and referrals to thousands of emergency, social service, and support resources. All calls are confidential.
Bottom line, we are here to answer the call.
Posted by No More Crying Angels at 8:35 AM No comments: 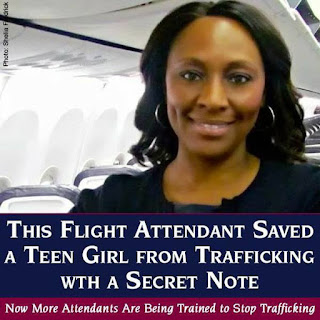 For many of us, planes symbolize one thing: vacation. Indeed, the mood on airplanes can be quite jovial, with so many traveling to and from vacation spots and allowing their worries to wash away.

Shelia Frederick is a flight attendant for Alaskan Airlines. But one day, while on a routine flight to San Francisco, USA, something caught her eye.

A well-dressed man sat next to a young, blonde girl who was wearing shabby looking clothes. She looked up when Shelia passed by, and when she did, Shelia felt that the girl's eyes were drilling straight into her soul.
When Shelia tried to talk to the man, he was immediately unpleasant. She immediately felt something was wrong, and went to the airplane toilet where she left a piece of paper and a pen.

As she walked past the girl again, she signaled for her to go to the bathroom.
The girl followed Shelia's instructions, and when Shelia returned to the toilet, she found devastating words on the scrap of paper: "Help me", it said.

Shelia went straight to the pilot who helped summon the police to meet them upon landing in San Francisco, according to the Independent.

As it turns out, the girl was a victim of human trafficking and had been kidnapped two months earlier.

Shelia's encounter and saving of the young victim occured in 2011, when the girl was about 14-years-old. Following the incident, Shelia became a member of Airline Ambassadors International, an organization launched in 2009 by former flight attendant Nancy Rivard to help flight attendants get better training in detecting victims of human trafficking.

Members of the organization are now working with the US Customs and Border Police to counter human traffic.

Flight attendants can be much better equipped to deal with these kinds of incidents if they're paying attention to the right warning signs, Nancy explains.

A few weeks after the incident, Shelia received a phone call – it was the young girl she had saved. "Thank you for saving my life," the girl told her.

The girl had been reunited with her parents and was undergoing therapy to process through her difficult experience.

Shelia and the girl are still in touch.

The UN estimates that about 1.2 million children are victims of trafficking each year. Human trafficking is the third largest criminal activity in the world, after drugs and arms.
Both girls and boys are sexually exploited, for instance, as cheap labor or soldiers, for adoption or are forced to commit theft, beg or traffic drugs - and things that we can never accept.

Posted by No More Crying Angels at 7:32 PM No comments: 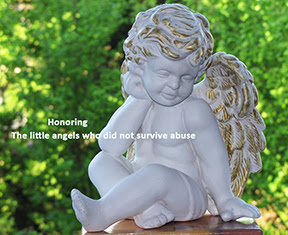 Most of us lead a life free from this kind of heartbreak--the loss of an innocent little child's life because of abuse. This is why awareness is so essential for prevention. Those who are abused but escape this fate might live with PTSD their whole lives, but they live. Those who do not, suffer this child's fate. And it isn't just children who are victims. Domestic and spousal abuse can be just as deadly.

Bella Capo wrote her book No More Crying Angels (release date October 14, 2017) to bring her own abuse, both childhood and spousal, into the open in order to encourage victims to be victors, not victims. She survived and went on to help so many who walk in her shoes through the Facebook movement, La Bella Mafia.


A Wisconsin man is accused of killing his girlfriend’s 16-month-old daughter in what police have called “the worst case of child abuse [we] have ever seen.”
Juan J. Maravilla, 30, was charged with first degree reckless homicide and child abuse after the girl’s mother brought her bruised body to a Green Bay-area hospital on May 25 after she had died, Green Bay police tell PEOPLE.

Hospital staff ordered an autopsy immediately, and the “results revealed the toddler’s death was not the result of one act of abuse but repeated abuse over an extended period of time,” Cpt. Kevin Warych of the Green Bay Police Department alleges to PEOPLE. Warych adds, “This is possibly the worst case of child abuse [we] have ever seen.”

Between the time of the girl’s death and her autopsy report, Maravilla was jailed for an unspecified alleged probation violation, Warych says. Jail records do not indicate the specifics of the alleged violation or the underlying offense.

Posted by No More Crying Angels at 11:16 AM No comments:

Child abuse is more than bruises and broken bones. While physical abuse might be the most visible, other types of abuse, such as emotional abuse and neglect, also leave deep, lasting scars. The earlier abused children get help, the greater chance they have to heal and break the cycle—rather than perpetuate it. By learning about common signs of abuse and what you can do to intervene, you can make a huge difference in a child’s life.
Understanding child abuse and neglect
Child abuse isn’t just about black eyes. While physical abuse is shocking due to the marks it leaves, not all child abuse is as obvious. Ignoring children’s needs, putting them in unsupervised, dangerous situations, or making a child feel worthless or stupid are also child abuse. Regardless of the type of child abuse, the result is serious emotional harm. But there is help available. If you suspect a child is being abused, it’s important to speak out. By catching the problem as early as possible, both the child and the abuser can get the help they need.
Myths About Child Abuse and Neglect
Myth: It's only abuse if it's violent.
Fact: Physical abuse is just one type of child abuse. Neglect and emotional abuse can be just as damaging, and since they are more subtle, others are less likely to intervene.
Myth: Only bad people abuse their children.
Fact: Not all abusers are intentionally harming their children. Many have been victims of abuse themselves, and don’t know any other way to parent. Others may be struggling with mental health issues or a substance abuse problem.

Read Full Article - Make a Difference
Posted by No More Crying Angels at 2:37 PM No comments: